Charlotte Wessels performing with Delain at the Palladium in Worcester, MA USA on Saturday, September 21, 2019

One of the funniest things about seeing artists/bands playing at the Palladium in Worcester, MA for the very first time, is the inevitable discussion about the city's pronunciation. A mainstay tour stop for the majority of metal tours (thankfully), "we" (I say this because though I live in neighboring Connecticut, the Palladium is my "home" venue) get many opportunities to see that discussion played out on stage.

Similar to places in the U.K., Worcester doesn't sound as it appears, with many people trying to add in the "r." While Amorphis and Delain are no strangers to the area, having played the Palladium multiple times, the lovely and talented Anneke van Giersbergen performed there for the very first time. She asked "so how is it pronounced?" The crowd gleefully shouted "Woostah" (recalling the hysterical iteration written on a piece of masking tape in the center of the stage when Anthrax played some years ago). Van Giersbergen noted "Its like Leicester in England, which is pronounced 'Lester." I chuckled...but not because of the comparison. In 2018, I had blown out a tire in a town in the U.K. some 30 miles from Leicester, but was forced to travel to the town because it was the only one that had the required tire in stock at the local Kwik Fit. It was there I had a rather amusing discussion with a local about town name pronunciations in the U.K. and the USA.

The tour package of Delain and Amorphis, along with Anneke van Giersbergen, seems on its face to be a bit of an odd pairing, however, these three have a bit more common than one would think. With Delain becoming increasingly heavier, adding in some more death grunts, and Amorphis becoming increasingly more symphonic, with much more of a balance between death and clean vocals, the paring doesn't seem so distant. However, there are some audiences that are present distinctly for one band or the other....and Worcester is one of those audiences.

Perhaps the most beautiful part of the tour package comes in the biggest oddity of all - Anneke van Giersbergen, who performs in her own mighty metal act Vuur, as well as The Gentle Storm. Anneke is no stranger to the harder side of music, but the minimalist approach on this tour is what makes her performance so breathtaking. Possessing one of the most gorgeous and most unique vocal styles in the world, Anneke simply walked up to the microphone with an acoustic guitar in hand and used her voice to own this crowd. When performing, you could hear a pin drop in the usually loud Palladium crowd, as if every syllable enriched those knowledgeable of what they were about to witness and drew the immediate and heart stopping attention of new fans wondering what Anneke had to offer.

Anneke van Giersbergen at the Palladium in Worcester, MA USA on Saturday, September 21, 2019

Performing songs from her history working with bands like Ayreon, The Gathering and Devin Townsend, van Giersbergen performing beautiful acoustic versions of "Valley of the Queens," "Saturnine" and "Ih-Ah." She added covers of Dolly Parton (chosen by the crowd when given the choice of "Jolene" and Kiss' "Sure Know Something"), Audioslave ("Like A Stone"), Pink Floyd ("Wish You Were Here"), Kate Bush ("Cloudbusting"), before closing with Iron Maiden's "Wasted Years," where she stunned the crowd with a vocalization of the guitar solo. It was such a unique opening act for a night of metal. However, when it comes to Anneke, just having the opportunity to hear that voice and see her lovely and comforting smile made it a natural fit. This wouldn't be the last time we would see her on this night. 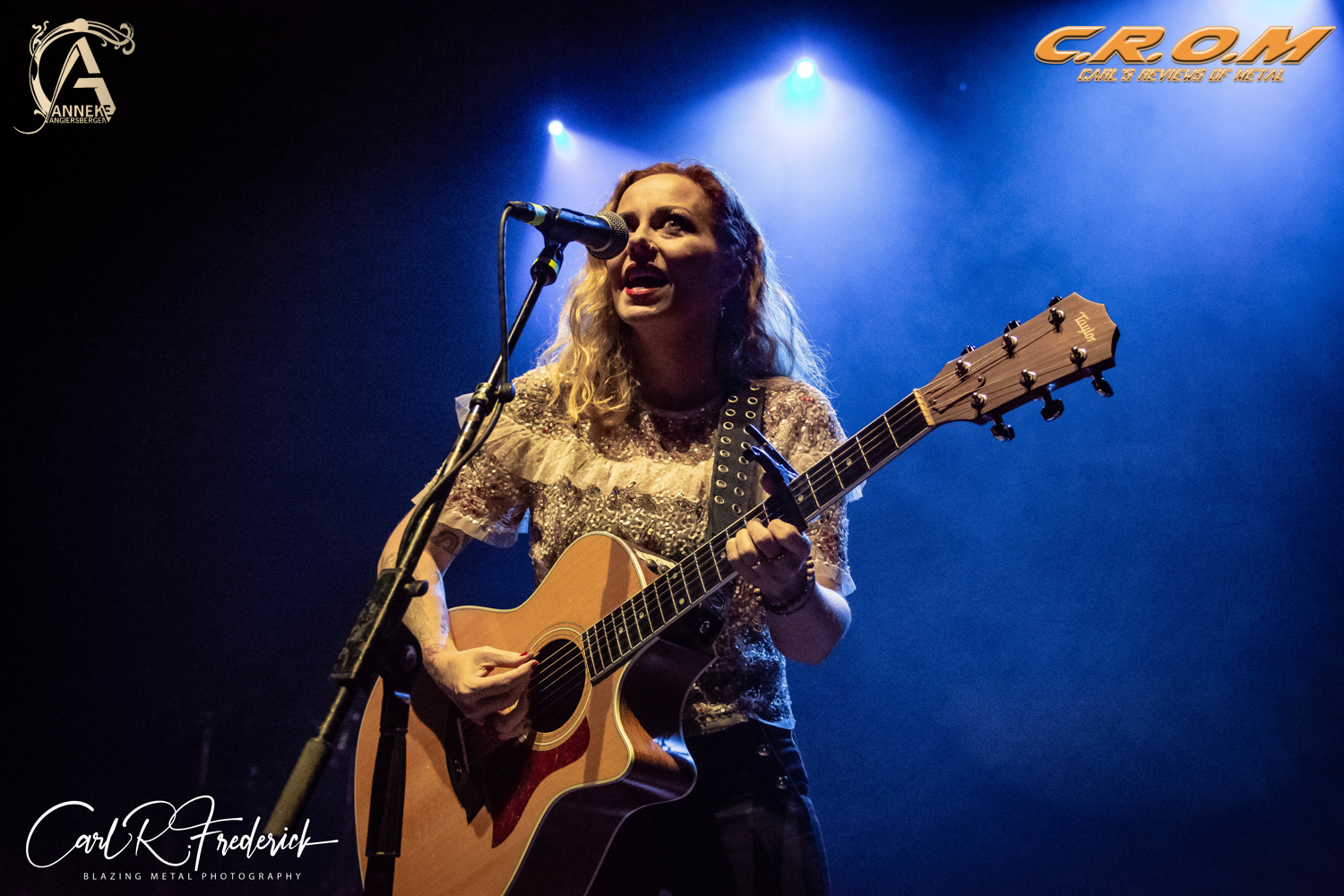 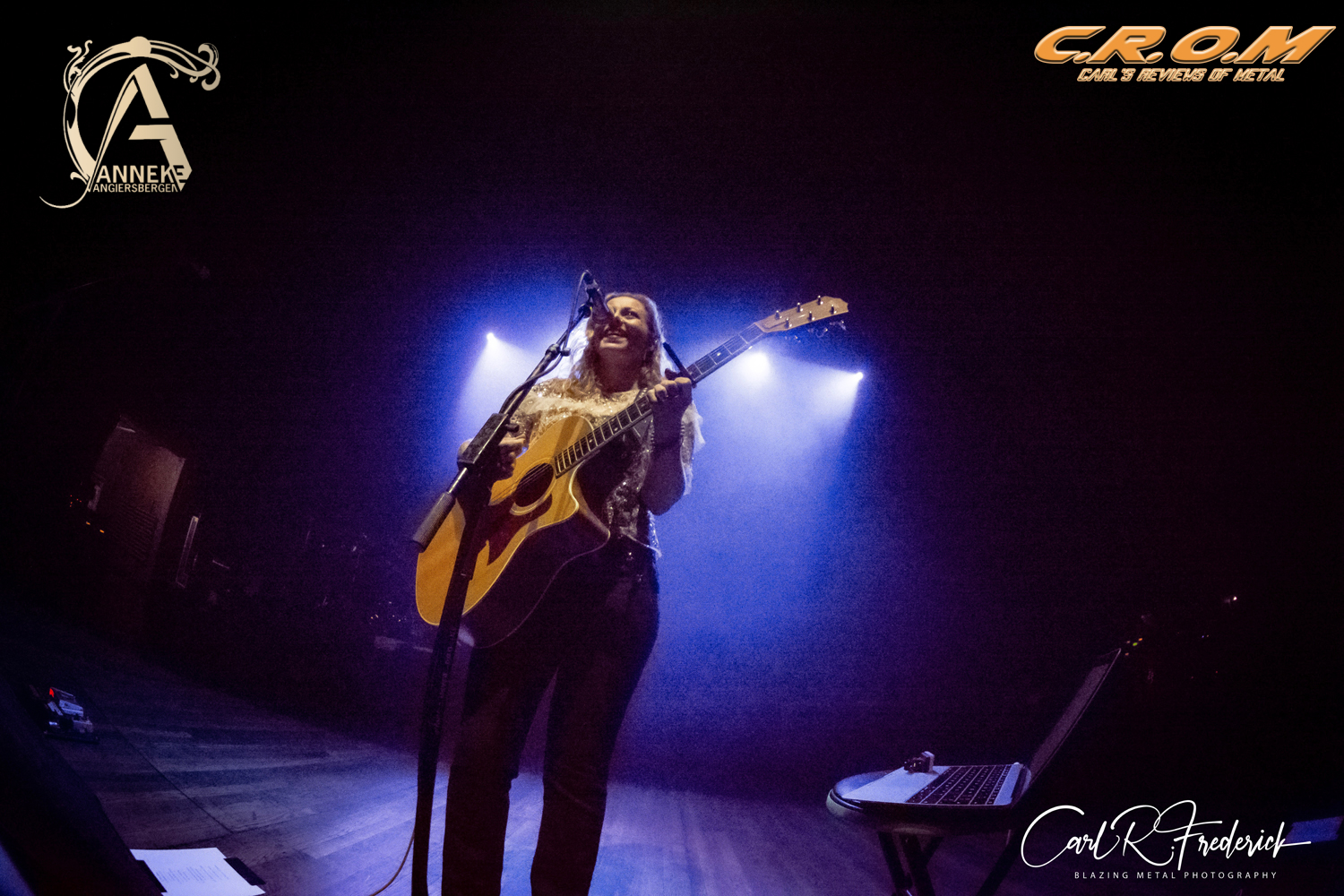 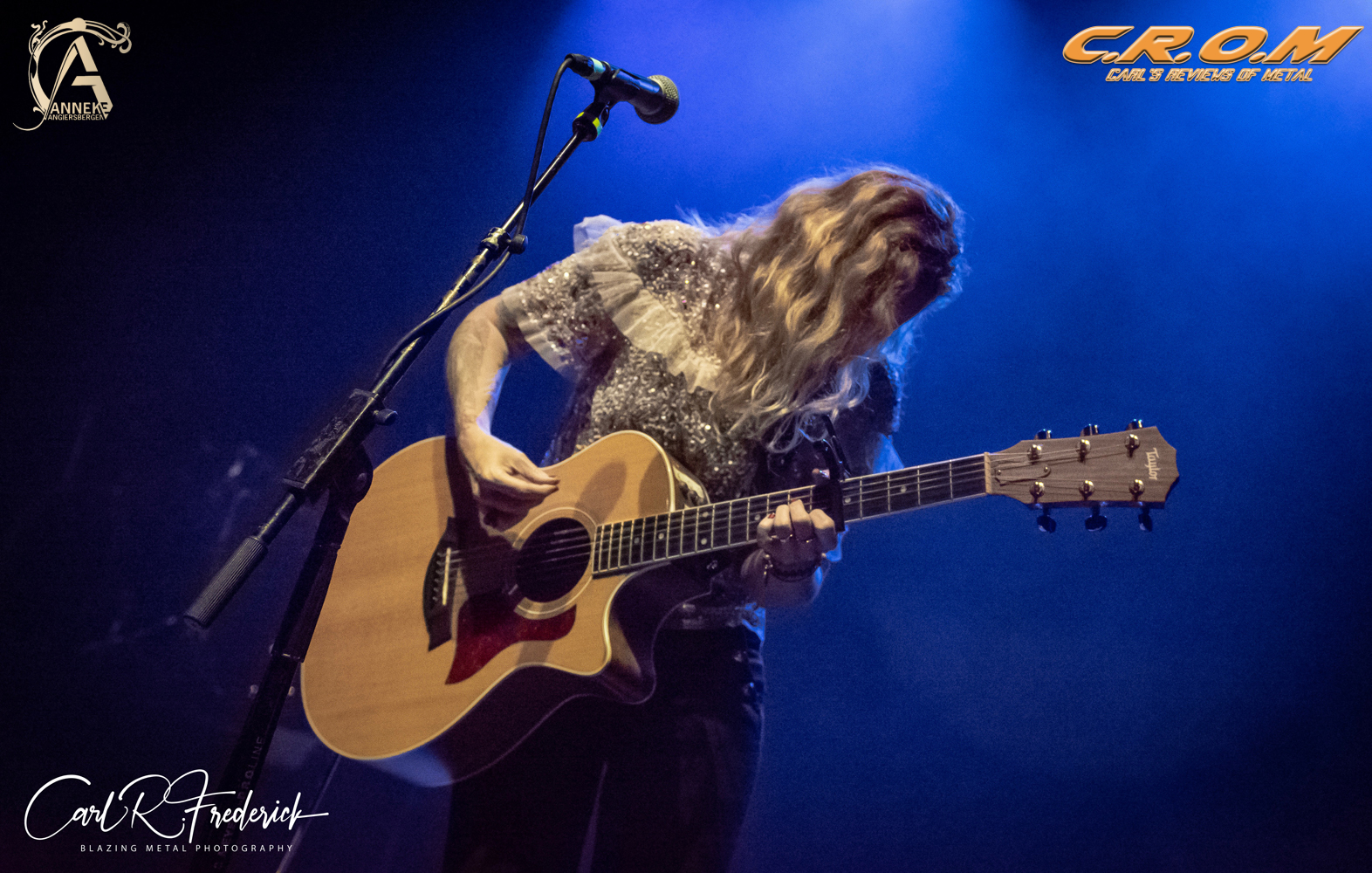 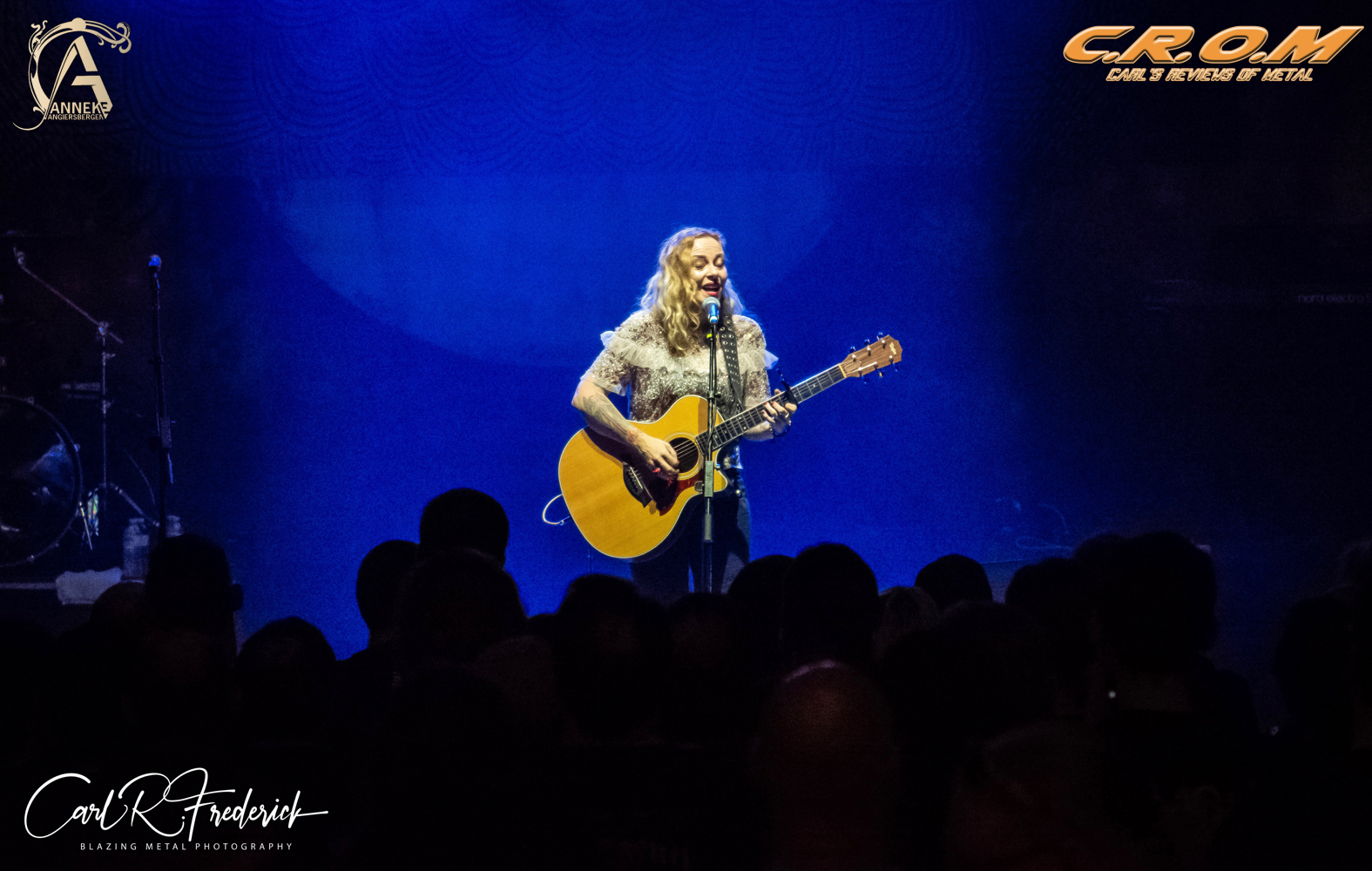 Finland's Amorphis has been a favorite of your author both in its brilliant discography and compelling and crushing live performances. Tomi Joutsen is one of metal's most dynamic and visually entertaining frontmen. With the ability to both take your breath away with his dynamic and calming clean vocals, and level the crowd with his crushing and perfect death growls, Joutsen is a show unto himself. After destroying the venue with each song, he would utter "thank you" in the most calm and respectful tone.

Tomi Joutsen with Amorphis performing at the Palladium in Worcester, MA USA on Saturday, September 21, 2019

With a back catalog that contains so much perfection in music, up to and including the latest effort "Queen of Time," the band presented a smattering of material that drew from both past and present. Opening with newer material "The Bee" and "The Golden Elk," Amorphis took control of the Worcester crowd and never let go until finishing them off with the classic "House of Sleep" (from 2006' "Eclipse").

With so few bands performing with a live keyboardist these days, both Amorphis and Delain prove just how important it is to depth (and reality) of the sound. Santeri Kallio (and Delain counterpart Martin Westerholt) is instrumental in creating the perfect soundscape for one of metal's best guitar duos: Esa Holopainen and Tomi Koivusaari. Kallio and Holopainen also represent the core of the band's songwriting, one that continues to top itself with every album up to the pinnacle release (for your author) "Queen of Time."

This night, the crowd was treated to five selections from the latest release. Notably absent this time around is the soul crushing (and personal "Queen of Time" favorite) "Heart of the Giant," the only "disappointment" in an otherwise brilliant performance. Hey, as a fan you cannot have everything. The defining moment in the performance came with "Amongst Stars," when Anneke van Giersbergen joined the band on stage for a duet with Joutsen.

Other tracks in the set: "Sampo" (from the brilliant "Skyforger"), "The Four Wise Ones" (the lone track from "Under the Red Cloud"), the classic "My Kantele" (from "Elegy"), "The Smoke" (the other song played from "Eclipse"), and two from the band's breakout classic "Tales from the Thousand Lakes" - "Into Hiding" and setlist mainstay "Black Winter Day."

Now getting back to my earlier reference regarding certain audiences that have distinct fans of one band or the other, nearly half of the Worcester crowd departed at the conclusion of Amorphis' set. What was left was a very enthusiastic crowd of Delainiacs that propelled the band's performance, one that was full of the typical energy that Delain is known for.

Charlotte Wessels with Delain at the Palladium in Worcester, MA USA on Saturday, September 21, 2019

Notably absent behind the kit, vocalist Charlotte Wessels announced during the set that Joey de Doer was going to be late to the tour, due to another issue in a long line of USCIS visa issues. Joining the band as a temporary replacement was Amorphis' Jan Rechberger, pulling double duty for a few nights. I'm no musician, but I'm pretty sure no one could even tell the difference with the caliber of Rechberger.

Delain broke out a brand new tune - "Burning Bridges" - to start the evening's set, which shows the band delving a bit deeper into heavier material. The band was back to just Timo Somers as the lone guitarist following the departure of Merel Bechtold back in June at the 2019 installment of Graspop Metal Meeting. It was also nice to actually see bassist Otto Schimmelpenninck performing rather than his bass tracks funneled in via computer this time out.

As previously stated, Delain is all about energy - and frontwoman Charlotte Wessels has the personality to draw that out of any crowd. Delain fans remain some of the most loyal and energetic, jumping and screaming practically the entire set. There is a symbiosis between this band and its fans that is undeniable and the latter doesn't just come and watch the band, but they live and breathe the band. No other act has as many country oriented fan groups, nor is as inspiring to as many women metal fans as Delain. No song embodies this spirit between band and fans than "We Are the Others," the anthem of the setlist.

Other tracks in the set list included: "Suckerpunch," "Hands of Gold" and "Fire With Fire" (all from the latest full length release "Moonbathers"), "April Rain" and "Control the Storm" (from the band's 2009 breakout album "April Rain"), "Pristine" and "The Gathering" (from the debut album "Lucidity"), "Stardust" and "Don't Let Go" (from 2014's "The Human Contradiction") and "Masters of Destiny" (from the very latest release "Hunter's Moon" EP).

Mismatched as it may seem on paper, the Delain/Amorphis co-headline tour is more symbiotic than you think. Even though there are distinct fans of one or the other, the bands have much to offer all fans willing to listen. The addition of Anneke van Giersbergen appears like an "oddball" to the unsuspected, but as I'm sure will be proven night after night of the tour - it will undeniably be the highlight of everyone's evening.